As the first Grand Tour of the season approaches, cycling expert Felix Lowe take a closer look at the riders, the route, the stand-out stages, and all the main talking points of the 104th edition of the Giro d’Italia that will run Saturday May 8 all the way to Sunday May 30 as teams and riders get set for what should be a memorable race that you can watch live on Eurosport.

By
Felix Lowe
Published 30/04/2021 at 12:11 GMT | Updated 04/05/2021 at 13:50 GMT
Starting in Turin and ending in Milan after a whopping three-week, 3,780-kilometre detour around Italy, including a total of 47,000 metres of climbing, the 2021 Giro d’Italia eases riders in with a time trial and some flat stages – but then the mountains and dirt roads come thick and fast.
With no defending champion and many of the top tier sprinters and classics men keeping their powder dry for the Tour, here’s all you need to know about what will nevertheless still be a compelling 104th edition of La Corsa Rosa.
You will be able to watch every minute of the event live and ad-free on eurosport.co.uk and the Eurosport app.
Giro d'Italia
‘The nerves are jangling’ – 18-year-old Ponomar has scare on descent
12 HOURS AGO

The pink jersey of Simon Yates during the 2018 Giro d'Italia

Three time trials last year played into Filippo Ganna’s hands so this year organisers RCS have laid on just the two: an opener to decide who wears the first pink jersey, and the second to decide, potentially, who wears the last.
Last year, suspense went right to the wire as Briton Tao Geoghegan Hart won the race after beating Jai Hindley in the final time trial to prise the maglia rosa from the Australian’s shoulders at the last possible moment.
This year it’s a similar format with a flat 9km time trial in Turin kicking things off, and a 29.4km time trial to the centre of Milan on the final day. A total of just 38.4km against the clock represents the fewest individual time trial kilometres since 2012, although that year there was an additional team time trial to factor in. The basic upshot is that the winner of this Giro will not need to be a chrono specialist, nor will he need to ride for a team that excels in the discipline as a unit.

Six stages for the sprinters

Don’t judge a book by its cover… Do that with this Giro and you’d think it was a fairly pedestrian affair – for the prostrate prologue is followed by a pizza-flat second stage whose only toppings (a couple of anchovies and an olive) are concentrated right in the middle. This should be the first of six stages that suit the sprinters.
Half of those are pretty much completely flat (stages 2, 5 and 13) while the other half (stages 3, 7 and 10) include a few mounds but should see things come back together for a fast finish. Nestled between back-to-back stages in the high mountains, stage 18 perhaps provides the sprinters their final chance to shine – although four little ramps in the final 30km of the leg-sapping 231km stage could ruffle a few feathers.
Given the lack of a final-day sprint showdown, plus the mountains-heavy nature of the race, it’s hard to see those sprinters who are not targeting the maglia ciclamino going the full distance.

Remember the mud-spattered world champion Cadel Evans taking a memorable win in Montalcino as Alexandre Vinokourov went into pink? Well, 10 years on and the Giro returns to the Tuscan strade bianche, with a mouth-watering Stage 11 that features 34km of gravel in the finale – and with it, either dust or sludge depending on the weather.
A few days earlier, the undulating Stage 9 finish at Campo Felice ends with two kilometres of uphill dirt roads on what should be a thrilling day for the fans. All in all, there are four hilly stages and as many with challenging rolling terrain – days which are suited neither to the mountain goats nor the sprinters. This should encourage some aggressive racing, with breakaways perhaps going the distance while the GC men fight to stay in contention and avoid a potential banana skins.

Six summit finishes – including the Zoncolan

While the fourth stage to Sestola comes on a plateau after a series of punchy ramps typical of the rugged countryside of Emilia-Romagna, the first uphill finish comes two days later with Stage 6 to Ascoli Piceno. While the final climb of San Giacomo is over 15km long, it’s average gradient of 6.1% should not have too many of the favourites reach for a change of bib shorts.
That moment will come on the second Sunday at Campo Felice with the gravel finale – regardless of the weather – although the first big bona fide summit finish comes in Stage 14 with the showdown on Monte Zoncolan. Using the lesser-known eastern approach for the first time since 2003, the 14.1km climb has an average gradient of 8.5% but peaks at a whopping 27% near the finish, the steepest slope of the entire race.

Average man v Zoncolan: How will our journalist fare on the legendary climb

Queen stage in the Dolomites

The 212km Stage 16 includes a massive 5,700m of climbing and includes the highest climb of the race, the 2,238m Passo Pordoi where the Cima Coppi prize will be up for grabs. The holy trinity of ascents that animate the second half of the stage also includes the Passo Fedaia and the Passo Giau ahead of the 17km drop to the finish in Cortina d’Ampezzo.
Any concerns that the queen stage, or tappone, doesn’t finish with a mountain-top showdown should be allayed by the heart-in-mouth technical descent off the back of the succession of high-altitude peaks. 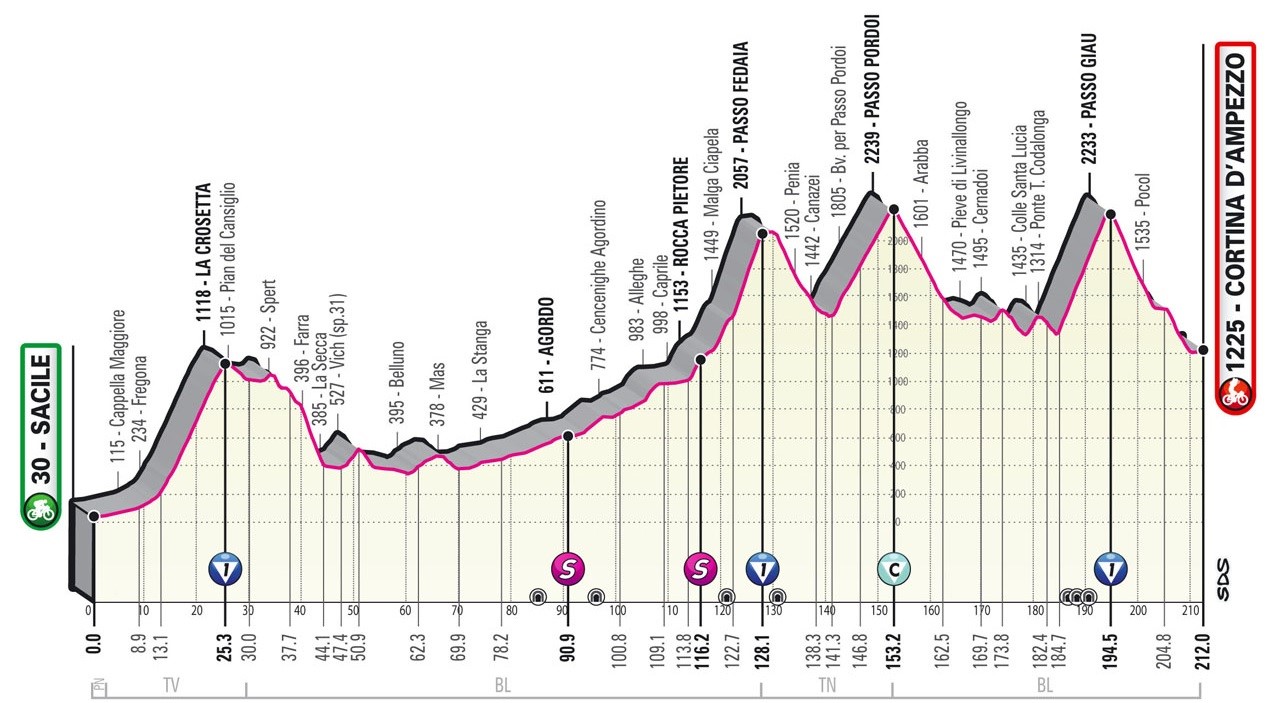 After the 10% ramps up to Sega di Aia near Trento on Stage 17, the remaining sprinters and classics men get a last roll of the dice ahead of the final mountain double header. This kicks off with Alpe di Mera (with its maximum gradient of 14%) near the Swiss border north of Milan on Stage 19, before the race’s final and decisive ascent on Alpe Motta following twin Swiss ascents on the Passo di San Bernardino and the picture-postcard Passo della Spluga, both of which rise above 2,000 metres.
Alpe Motta is a two-tier climb with segments pushing 9% coming either side of a 1km plateau which should keep the suspense going right to the end. Three successive Cat.1 climbs condensed into the final 85km of the last road stage should decide the ultimate destiny of the maglia rosa – or, even better, keep us guessing going into the final TT into Milan.

Initially scheduled to start in Sicily, the 2021 race now gives the island a wide berth, as well as Sardinia and most of southern Italy. When Hungary pulled out of the grande partenze last year amid concerns of the spiralling pandemic, Sicily jumped in to host the rescheduled start for the October edition. The most southerly the race goes now is the top of Puglia in Stage 8, while the route also never ventures onto the Tyrrhenian coast.

With the unexpected 2020 winner Tao Geoghegan Hart eyeing up a maiden Tour de France participation in July for Ineos Grenadiers, there will be no defending champion at the Giro. Instead, the number one dossard will go to Geoghegan Hart’s teammate Egan Bernal, who makes his own Giro debut.
The Colombian is one of three previous Grand Tour winners who will take to the start – although the presence of double Giro winner Vincenzo Nibali is yet to be confirmed following his fractured wrist sustained in training. The Sicilian will be the only previous winner of the Giro, with Britain’s Simon Yates, who came so close the year he won the Vuelta in 2018, the bookmakers’ favourite.

Three years after he fell off the podium and then withdrew on the race’s penultimate day, Pinot was in line to make a return to the Giro in a bid to reboot his GC credentials at Groupama-FDJ. But after the Frenchman’s struggles at both Tirreno-Adriatico and the Tour of the Alps, it became clear that he’s yet to recover from the injury which hampered his Tour last September.
Where the fragile 30-year-old goes from here is anyone’s guess – but most will wish him a speedy recovery so we can see him back to his best again once he draws a line under the most difficult chapter of his career.

The 2013 and 2016 champion’s training crash a fortnight ago means that if Nibali does manage to take to the start in Turin, it will be his first race since Milan-San Remo in late March. The 36-year-old is now back in training with a carbon brace on his arm, but it remains to be seen if Trek-Segafredo takes a gamble on his fitness – and, if they do, just what kind of condition Nibali will be in.
The Shark of Messina usually gets stronger as Grand Tours progress – and the relatively easy opening week could play into his hands here. But it would be a big shame if Nibali was out of contention before the high stuff comes along, so the veteran will have to make an honest assessment of where he’s at, or risk writing off one of his no-doubt few remaining seasons.

Vini Zabù out, Androni in

There was minor uproar when the wildcard teams were announced and it emerged that Gianni Savio’s Androni Giocattoli-Sidermec had been overlooked despite their consistently aggressive displays during last year’s Giro. In their place, a spot went to a Vini Zabù–Brado–KTM team that was soon engulfed in a doping scandal. This reopened the door to Androni, who have since been reinstated – although only after Savio awkwardly laid into RSC with a rather bilious diatribe.
Making its Grand Tour debut this year is the Italian-registered Eolo-Kometa team, launched by the retired Spanish rider Alberto Contador and run by his fellow two-time Giro winner, Ivan Basso. What can we expect from them? Well, looking at their roster – not much. Good thing Androni are there, after all.

All eyes on Evenepoel

Just over six months after he was meant to make his Grand Tour debut, Remco Evenepoel finally takes a bow. The Belgian sensation was forced to pull out of the Giro last October after his nasty tumble in Il Lombardia. Still only 21, Evenepoel had won four successive stage races in 2020 before the crash curtailed his meteoric rise through the pro ranks. Expectation last year was understandably huge ahead of the Giro – but this time round, it may be wise to preach caution.
While Evenepoel is an all-rounder with a winning attitude and tactical nous beyond his years, he hasn’t raced since the day he somersaulted over a bridge last October. In his absence, teammate Joao Almeida made his own eye-catching debut – wearing the pink jersey for two weeks en route to finishing fourth. It will be interesting to see how the Portuguese 22-year-old dovetails with Evenepoel at Deceuninck Quick-Step this May.

Ninetieth anniversary of the maglia rosa

The 104th edition of the Giro will celebrate the 90th anniversary of the introduction of the race leader’s pink jersey, with a special logo on this year’s maglia rosa. The first man to don the famous garment was the Italian Learco Guerra during the 1931 Giro, with compatriot Francesco Camusso emerging as the eventual winner.
With a flat race against the clock up and down the river Po deciding who will wear the first maglia rosa this May, Filippo Ganna is odds-on favourite to succeed his countryman Guerra ninety years on, picking up the race where he left off – with a TT win. That said, don’t rule out Evenepoel coming back with a bang.
Stay tuned for a full pink jersey preview and a run-through of all the burning questions ahead of the 2020 race...
Giro d'Italia
'F*** it, I'm going to make it!' – How Van der Hoorn thwarted sprinters and Sagan
12 HOURS AGO
Giro d'Italia
'A lot of mistakes' – Smith criticises Bora after Stage 3 failure
12 HOURS AGO
Related Topics
CyclingGiro d'Italia
Share this article