Expert view from Germany: What next for Philippe Coutinho? 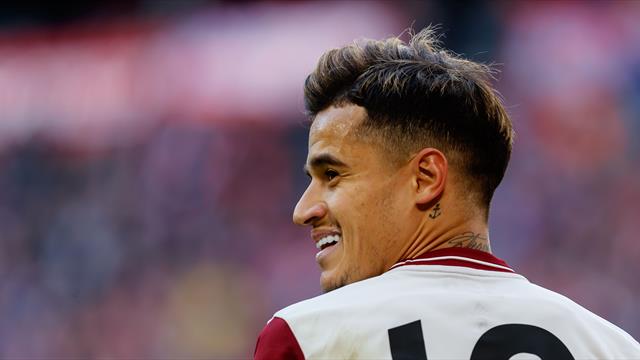 Bayern Munich's Philippe Coutinho, like every player, has to be patient during the coronavirus pandemic, writes Eurosport Germany's Florian Bogner.

As a professional whose contract expires on June 30, the crisis brings with it another dimension of uncertainty.

So although there are reportedly five clubs interested in him, there is a catch.

Coutinho is obviously behaving just like many parents are. Staying at home in Munich, the 27-year-old is currently spending the time with his wife Ainê, daughter Maria and son Philippe Jr. inside their own four walls.

Captioned "Our quarantine #stayathome", the Bayern midfielder recently published a video on Instagram of him playing with his children.

Shortly afterwards, there was a post with him training at home, as well as an advertising slogan from his sponsor: "If you have ever dreamed of playing in front of a worldwide audience, now is your chance."

Of course, the message being to stay at home.

Will Coutinho ever play for Bayern again?

Like all professionals, Coutinho now has to do one thing - wait and see. Considering Coutinho is on loan from Barcelona to Bayern until June 30, his contract situation is even more complicated.

It is currently unrealistic to think the Bundesliga season can really be completed by the end of June and we don't know what will happen to players with expiring contracts.

Who knows whether the Brazilian may have already played his last game for Munich? It currently seems almost impossible that Bayern will prematurely shell out the fixed transfer fee of €120m.

Under coach Hans-Dieter Flick, Coutinho has no regular place in the team, either deployed behind the striker or as a "false seven" on the left wing. He is currently only a second choice and has not shown significant progress since the coronavirus lockdown.

Barcelona also seem to be planning without him. According to reports in Spain, Barca are apparently more eager to get Neymar back from Paris Saint-Germain and to reinforce their attack with Lautaro Martínez from Inter Milan.

Coutinho, on the other hand, could soon be seen purely as money. Even Antoine Griezmann is now on the market, according to Spanish outlet Sport.

Inter Milan, Tottenham Hotspur, Chelsea, Arsenal and Manchester United are all interested in the Brazilian, according to the Daily Mail.

"We all know what he's capable of," French World Cup winner Emmanuel Petit said at a Paddy Power Event.

"I was a big fan of his when he was in Liverpool. I would be very happy to see him again in the Premier League."

" I'm pretty sure it would work for him. He fits perfectly in the Premier League."

Philippe Coutinho could be set to leave BayernGetty Images

The problem; English clubs are currently only interested in signing him on loan, but Barcelona would like to sell him.

Rivaldo, who faced Petit in the 1998 World Cup final, believes Coutinho will go back to Barcelona due to the complex situation, where the 27-year-old is still under contract until 2023.

"He will return to Spain," the Brazilian said at a Betfair event.

The Bundesliga, according to Rivaldo, does not suit the agile midfielder anyway.

He added: "I always thought that Coutinho could adapt better to Spanish than to German football, also because of the language and lifestyle for a Brazilian in Germany."

Coutinho should therefore "fight" to get another chance at Barcelona, ​​according to the former Barca star.

" I believe in his quality, but a lot will depend on whether he has the necessary mental strength. The experience from the Bundesliga should have woken him up and shown that Barca is the right place for him."

Otherwise there are currently only two other scenarios.

Scenario A: Coutinho is offset against Inter Milan on the Martínez deal, but would then have to go back to his first European club, where he was not really happy.

Additionally, it is not yet clear how the situation will develop in northern Italy, which has been hit so hard by the coronavirus.

Scenario B: Barcelona lowers the price for Coutinho so much that it becomes attractive for Bayern Munich to firmly commit to him. Coutinho and his family are reportedly enjoying their lives in the Bavarian capital.