Aubameyang scores and sees red as Arsenal draw at Palace 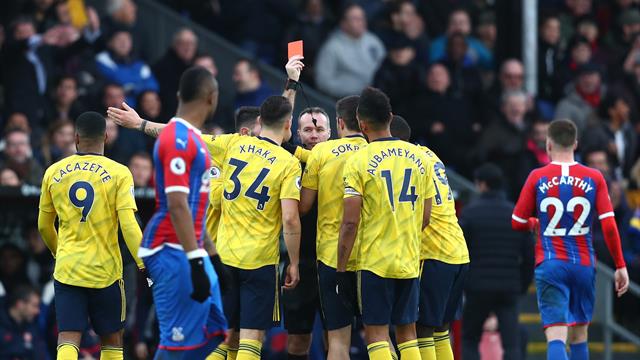 Crystal Palace remain one point ahead of Arsenal in the Premier League title after the two sides fought out a draw in blustery conditions at Selhurst Park.

The visitors started the brighter of the two and deservedly took the lead after 12 minutes. An eighteen pass move ended when Alexandre Lacazette clipped a through pass into the area to Pierre-Emerick Aubameyang in the penalty area, who coolly slotted his finish past Vicente Guaita.

Roy Hodgson’s team took a long time to get going in the game but levelled early in the second half. Jordan Ayew’s shot caught a deflection off David Luiz before looping over Bernd Leno and into the net. Aubameyang was then sent off for Arsenal after a VAR review determined that a bad tackle on Max Meyer needed to be upgraded from a yellow to a red card. Sokratis Papastathopoulos later cleared one chance off the Arsenal line in a frantic finish.

The draw was the third in a row in the Premier League for Palace, who now face a trip to the Etihad to face champions Manchester City next weekend. For Arsenal manager Mikel Arteta it was a frustrating point after a game in which his team had largely dominated possession.

Was this a better day for VAR? The controversial new technology has been a talking point all season and is currently in the spotlight after being used to disallow a late equaliser for West Ham United at Bramall Lane on Friday night. Today though it picked up a terrible challenge from Aubameyang that referee Paul Tierney had missed the severity of, and the ensuing red card was the correct decision. Whether football should be using this technology at all will remain a contentious issue for the rest of the season and beyond.

But for his red card Aubameyang would have been the best player at Selhurst Park today, but Lacazette’s presence was also crucial to Arsenal. His movement and link play are pivotal to the quick, dynamic attacking football that Arsenal are trying to develop under Arteta, and he crowned his performance with a classy assist for the opening goal.

Pierre-Emerick Aubameyang celebrates scoring a goal for Arsenal with Alex Lacazette during the Premier League match between Crystal Palace and Arsenal FC at Selhurst Park on January 11, 2020 in London, United KingdomGetty Images

12’ GOAL! Crystal Palace 0 Arsenal 1 (Aubameyang 12) A beauty for Arsenal, who've earned this after a great start. Some high speed passing between Luiz, Ozil and Lacazette, the latter slips a lovely through pass through the centre of the Palace defence to Aubameyang. He takes a touch before placing a low shot into the bottom corner to put Arsenal in front.

54’ GOAL! Crystal Palace 1 (Ayew 54) Arsenal 1 From nothing, Palace are level! A free kick from deep is played to Meyer, who drills a low cross into the area. Kouyate gets to it first, and lays it off to Ayew. From twelve yards out on the right Ayew shoots, and the ball takes a wicked deflection off Luiz to loop over Leno and into the net.

65’ Aubameyang catches Meyer with a nasty one on the ankle and is booked. VAR are reviewing that tackle, are they going to overturn this and make it a red?

67’ RED CARD They are. After review, Tierney has been advised that the tackle was sufficiently dangerous to warrant a red card. Tierney didn't go over to the monitor and check himself - in fairness it was an ugly tackle that folded Meyer's ankle, and could have caused a serious injury. Aubameyang is off and Arsenal are down to ten men.

79’ SO CLOSE! A brilliant ball from the left by Zaha is won by Tomkins at the back post. He floats a header back across goal, and thankfully for Arsenal Sokratis is there to hook the ball off the line before his colleagues scramble it behind for a corner.

83’ OFF THE POST! Superb play from Martinelli down the left finds Lacazette in the penalty area. He lays it off to Pepe, who drills a low, angled shot past Guaita but it hits the inside of the post and rebounds straight to the goalkeeper.