Rangers held by Queens in first game after King takeover 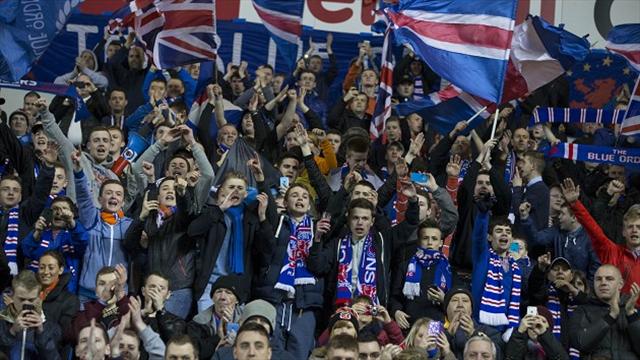 Rangers again failed to take off-field positivity on to the park as 17-year-old Queen of the South forward Aidan Smith marked his first league appearance with a late equaliser in a 1-1 draw at Ibrox.

There was plenty for the Rangers players to draw on with Ibrox great John Greig among a 35,018 crowd as guests of the new-look board, but there was a distinct lack of inspiration on the park with Queens coming closest in the first half when Michael Paton hit the post.

On a day when Newcastle owner Mike Ashley's associates Derek Llambias and Barry Leach were suspended by the club, Rangers looked like benefiting from one of their signings when on-loan St James' Park midfielder Haris Vuckic netted a scrappy goal in the 77th minute.

But Queens got the point their enterprise merited when Smith forced the ball home from close range with five minutes left after Lee Robinson had made a good save from Paton.

Dave King and his allies had continued the off-field changes by adding and removing directors during the day but they might have to make changes in the football department to kick-start the club's Scottish Championship promotion challenge.

Rangers have now won just three times in 10 matches under reluctant caretaker boss Kenny McDowall and they missed the chance to draw level on points with Hibernian with the first of two games in hand.

The attendance was at least double recent Ibrox turnouts - but it took just over two minutes for the first signs of dissent from the stands as fans voiced their displeasure at how deep Rangers were sitting as Queens kept possession.

The two Nickys, Clark and Law, soon got Rangers up the park with a sweeping move but the former curled a decent effort just wide.

The presence of Jon Daly, who was playing just behind Clark in a 4-2-3-1 first-half formation, forced another chance for Clark but he could not generate the power to trouble Zander Clark with his header.

Rangers were lacking purpose and direction in attack and their best chance of the half was a gift from the Queens goalkeeper.

A speculative drive from Vuckic was deflected but Clark should have done a lot better than palm it straight out to Daly, however the Irishman snatched at the chance and blazed over.

The visitors created an equally good chance two minutes later when Gavin Reilly's pass sent Paton through but the former Aberdeen player curled a left-footed shot off the outside of the post.

Queens soon cut their opponents open again but Iain Russell's shot was palmed away by Lee Robinson and Reilly headed the rebound over on the stretch.

Vuckic sporadically looked a threat when Rangers managed to get the ball to him on the left and he shot a yard over under pressure and there was an air of desperation about the penalty appeals when he fell over the grounded Carmichael.

Queens were getting plenty of the ball in the final third but lacked a final ball and they were made to pay.

There appeared little danger after Walsh's direct running was thwarted but the ball broke kindly for Vuckic despite the efforts of two defenders to meet a Lee Wallace cross and the Slovenian slotted home from eight yards.

But Queens picked themselves up and Dan Carmichael got in behind the Gers defence before setting up Paton, whose shot eventually ended up at Smith's feet to level.

Walsh had a shot well saved after a good late run as Queens held on.

Queen of the South
Team