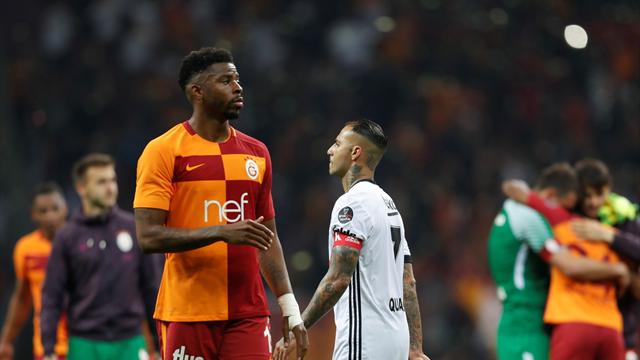 The home side - who have now won their last four matches - took the lead in controversial circumstances after 18 minutes when Eren Derdiyok was adjudged to have used his hand to block Ljajic's free-kick effort. After watching a video replay the referee pointed to the spot and Ljajic converted from the spot.

Galatasaray's response was immediate and Fatih Terim's side were unfortunate not to level when Selcuk Inan struck the woodwork.

Controversy is never far away in one of the world's fiercest rivalries and the visitors will be left incensed after having three strong cases for a penalty turned away.

In a game littered with talking points, Ricardo Quaresma also had a goal ruled out for offside after the break, while substitute Omer Bayram and Maicon spurned late chances for Galatasaray.

Defeat piles the pressure on Galatasaray boss Fatih Terim, who has now overseen only two victories in their last 10 games. Besiktas leapfrog their rivals into third in the Superlig with the same number of points, but both clubs are still six points adrift of the summit.

Did the referee make the right calls? Derdiyok and Henry Onyekuru both had credible claims for a penalty rejected while there was a strong shout for a handball. The referee took a lengthy time to consult VAR on all three occasions, but the visitors will feel they ought to have had at least one given.

MAN OF THE MATCH

Adem Ljajic (Besiktas) - Playing as one of three supporting midfielders, the 27-year-old pulled the strings for the hosts. His pace and direct running caused problems for Galatasaray all evening.

17' - PENALTY TO BESIKTAS! Ljajic strikes the free-kick from the edge of the penalty area, but his vicious shot is blocked. Wait, the referee is going to use VAR to determine if Derdiyok used hand used to block the shot... Yes, the referee gives the penalty!

18' - GOAL! Besiktas 1-0 Galatasaray: Ljajic steps up confidently... and puts away the penalty. It isn't the cleanest of strikes and Muslera got a hand to it but couldn't keep it out. Besiktas lead.

33' - OFF THE CROSSBAR! Wow, Galatasaray are desperate unfortunate not to be level. Seluck delivers another corner, it falls kindly for Ozan whose hooked effort cannons off the woodwork and away to safety.

40' - VAR IN USE! Derdiyok gets a shot away but is then appears to be caught by Uysal inside the penalty area. The referee is going to see the a video replay of the incident. Will Galatasaray have the chance to equalise from the spot? After much deliberation, the referee has opted against giving Galatasaray a penalty. There is a bit of a scuffle between the players now and Fernando goes into the book.

44' - NO PENALTY! Mayhem after a cross into the Besiktas causes panic. While trying to clear their lines the ball seems to hit the arm of a defender and the referee wants to see a video replay. After a moment or two he decides to play on. No penalty.

68' - AGAIN, NO PENALTY! Uysal slices his clearance and Onkeyuru pounces. However, the Besiktas defender pulls him down in a desperate bid to make amends. The referee is, once again, going to consult with VAR. And for the third time this evening Galatasaray have a strong case for a spot-kick waved away. The referee is indicating that Onkeyuru used his arm to control the ball when he was fouled. So the free-kick goes Besiktas's way.

85' - GREAT CHANCE FOR GALATASARAY! But it goes begging. It falls to Bayram who has only been on the pitch a matter of minutes. He is left unmarked to meet a cross at the back post but he hooks it wide.

90'+5 - OVER! Drama right to the final-whistle! Galatasaray win a free-kick on the edge of the box but Maicon curls it over. He should really test the goalkeeper from there.