Honda pulls out of F1 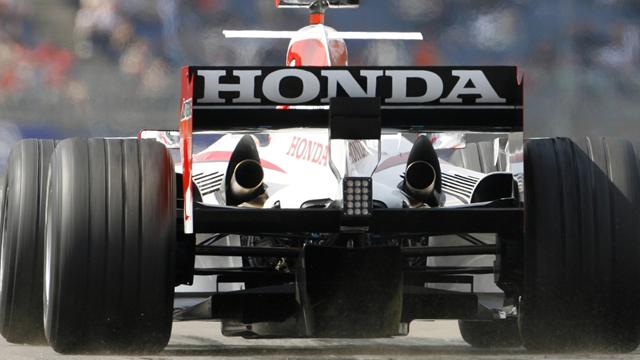 Honda Motor Co has announced that it is pulling out of Formula One motor racing, although next year's Japanese Grand Prix at the Suzuka circuit will still go ahead as planned.

Amid slumping car sales triggered by the worldwide downturn, Honda are no longer willing to bankroll the Formula One team and its estimated annual budget of $500 million.

Honda Motor Co Chief Executive Takeo Fukui told said a return to the sport could take time, and that there were no plans to continue as an engine supplier.

"This difficult decision was taken recently and was made in light of the quickly deteriorating operating environment facing the global auto industry," Fukui said.

"Honda must protect its core business activities and secure the long term as widespread uncertainties in the economics around the globe continue to mount.

"We will enter into consultation with associates of Honda Racing F1 and its engine supplier Honda Racing Development regarding the future of the two companies. This will include offering the team for sale."

Fukui, who told Reuters this year that he would "spend a trillion yen" if he could to make Honda a Formula One winner, said there would be no speedy return to the sport.

Honda would in any case have little time to find a buyer with the 2009 season starting in Australia on March 29.

"We would love to be able to continue in Formula One but we're simply not able to in the current financial climate," Fukui said.

"At testing in Barcelona last month we were still positive about racing in F1 next season.

"But we have to use our resources sensibly. As far as potential buyers go, our criterion would be that they continue to employ the hundreds of engineers who work for the Honda team."

Honda, like all of its rivals suffering from a sharp fall in global car sales, saw its sales in the United States, its biggest market, slump 32 percent last month.

"Pulling out of F1 will have a big impact in terms of cutting overall costs," said Fukui. "The most important thing for Honda is to see where we are in the next three to five years."

With Formula One's power-brokers desperately seeking cost-cutting measures to ensure its own survival, Honda's departure will have serious implications for the glamour sport.

It also leaves Britain's Jenson Button without a drive for 2009, although some teams have yet to confirm their lineups.

Brazilian Bruno Senna, the 25-year-old nephew of the late triple world champion Ayrton, had also been tipped to take the place of compatriot Rubens Barrichello at Honda next season.

Honda's exit leaves the multi-billion dollar sport facing a depleted grid of 18 cars if no buyer can be found in the extremely tight time-frame available.

It will also prompt fears that other major manufacturers, with their factory production suspended and thousands of staff laid off, could follow Honda's example.

Honda and Toyota Motor Corp have been the big spenders in Formula One in recent years.

Ross Brawn, the former Ferrari technical director who won multiple world championships with Michael Schumacher, was hired to run the Honda team at the end of last year.

Despite its huge resources, Honda had a dismal 2008 season and was pinning its hopes on next year's new rules levelling the playing field.

Button, a winner for Honda in Hungary in 2006, scored just three points and Barrichello took 11. The team finished ninth overall.

Honda's best finish in the constructors' championship was fourth, in 1967 and 2006, although they powered McLaren and Williams to a string of titles in the 1980s and 1990s.

The last team to leave Formula One was Honda-backed Super Aguri, the tail-enders who folded for financial reasons in April.

The sport's governing body said on Friday that Cosworth would provide Formula One teams with a low-cost engine option from 2010.

FIA president Max Mosley said the body was in exclusive negotiations with Cosworth, Xtrac and Ricardo Transmissions (XR) to provide a complete powertrain (engine and gearbox).

"We can get the cost down from the current £200 million ($293.4 million) plus [per team] down to about £30 million at which point the income from television and the income from sponsors covers it and you don't need these huge subsidies from the car industry," Mosley said.